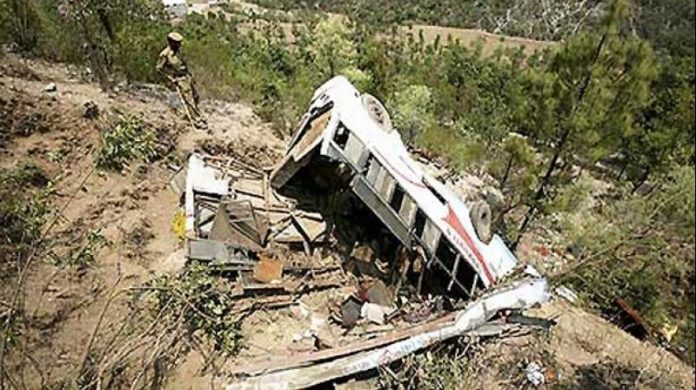 Eight people were killed and 20 others injured on Tuesday Till 16:25 HRS after the bus they were travelling in fell into a deep gorge in Tyuni area.

According to latest media reports, six people died on the spot while four others died at the hospital Till 18:30 HRS.

The private bus fell into a 200-metre deep gorge near Daragarh, killing six people on the spot and leaving around 22 others injured. Two out of the wounded people succumbed to injuries at Tyuni hospital, Chakrata Police station in-charge Arvind Kumar said: Twenty other passengers, who sustained injuries in the mishap, are undergoing treatment at the hospital. Seven of them are stated to be serious. They have been referred to Dehradun, he said.

The bus was on its way from Tyuni to Vikasnagar when the incident occurred, the official said.

Uttarakhand Chief Minister Harish Rawat and Governor K. K. Paul have expressed grief over the loss of lives in the mishap and directed authorities to extend all help to the injured for their treatment.