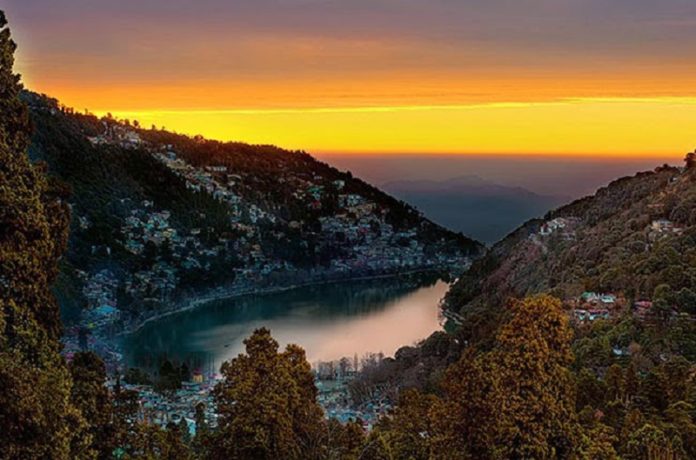 The most attractive centerpiece of Nainital – Naini Lake, which surrounded by panoramic seven hills is said to be one of the emerald green eyes of Shiva’s wife, Sati (Naina is Sanskrit for eye) has lost almost “Eight Meters” of its depth in the last 37 years as per Geological Survey of India latest survey due to illegal construction, sewerage and waste disposal, according to a study. In 1979, the Geological Survey of India had measured the lake at 25 metres, but the recent survey conducted by the state irrigation department revealed that the water body’s depth has shrunk to 17.25 metres.

Deepak Rawat, district magistrate of Nainital told, “The report from the irrigation department indicates a decrease of 7.75 metres in its depth. The process for measurement of other lakes like Naukuchiatal and Bhimtal is still on and once it is complete, we will seek for solutions.”

Officials say that disposal of construction waste and other garbage over the years have lead to fall in the lake’s depth. The lake lies ignored for over two decades as no comprehensive research has been done since 1995 to study changes and requirements to preserve it and surrounding water bodies.

“This is the result of rampant construction and lack of proper policies to conserve our water bodies. Besides, ignorance related to environmental issues has been one of the key problems,” said 68-year-old Ajay Singh Rawat, a noted activist who was associated with a campaign to save Naini lake. A PIL was filed by Rawat in 2012 in the Uttarakhand high court, requesting that Nainital be converted into an Eco-sensitive zone in order to save the eco-system of the area.

Last year, the level of Naini lake had dipped by 10 meters, which is below the normal level. Less rain during last winters led to the decrease in the depth. The situation now seems to have normalized with 125 mm of rainfall this year.

Other reasons cited for the decrease in the level of water in lakes includes debris and silt deposit at its base. It hampers the natural course of slow drainage. The silt deposition in the lake has been huge due to landslides in the town since last two years.
It is interesting to note that in 1880, a series of landslides had killed over 150 people, forcing the British government to realize that it was vital to have drainage system in the catchment area of the Naini lake to avert any tragedy.

About 79 km of drainage system was constructed by the British government comprising ‘nullahs’ and smaller canals. The Hill Side Safety Committee, formed after the first recorded landslide of the city in 1867, recommended ban on further construction of buildings and platforms. The city was also divided into three zones- safe, prohibited and dangerous.

Earlier, in April a bid to combat water woes in Nainital in the backdrop of declining level of various water bodies, the lake town’s Jal Sansthan has decided to implement a rotation policy, which will be done for the first time. Under this policy, water would be supplied to different localities at different times.
Leave something in response: