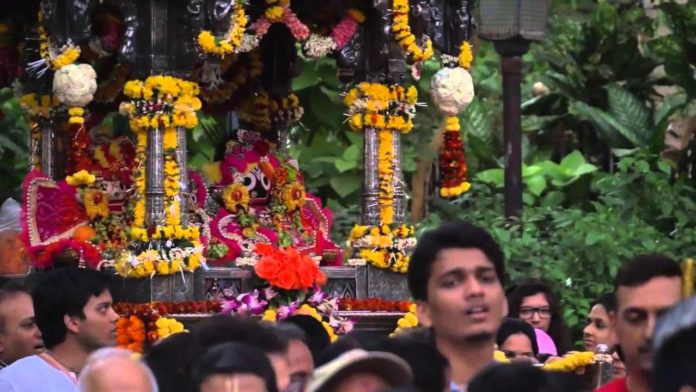 Today on the auspicious day of Sharad Purnima the Jagannath Yatra (Moving Deities Jagannath in Rath) started by Madhuban Ashram, in Rishikesh Uttarakhand, Today is the full moon autumn night when Lord Krishna called his devotees to him to perform the Maha Raas in Vrindavan.

Ratha-jatra is derived from two Odia words ratha/rotho meaning “chariot” and jatra meaning “journey”. The festival involves an annual procession (journey) of a deity’s idols. Other names for the festival include ratha jatra or chariot festival.

Today its one of the most auspicious days of the Hindu Calendar when all the deities are decorated with the finest of dresses and the most expensive Jewelleries from their cupboard. Lord Jagannatha wears his Golden arms today for the devotees visiting the temple today.

In Shrimad Bhagawtam the entire enactment of Raasa by the Lord is described by none less than Maharishi Veda Vyasa. It narrates the entire enactment in his own way wherein he lets the people know that the entire dance episode was a form of merger between the Paramatma (The Supreme Soul) and the Jeevatma (the worldly soul). Narayaneeyam by Narayan Bhatta Giri also describes, in its brief but spectacular rhythmic verses, the entire episode.

Any new venture can be started today and people waiting to occupy their new dwellings can do so without asking for the auspicious time from the priest’s.