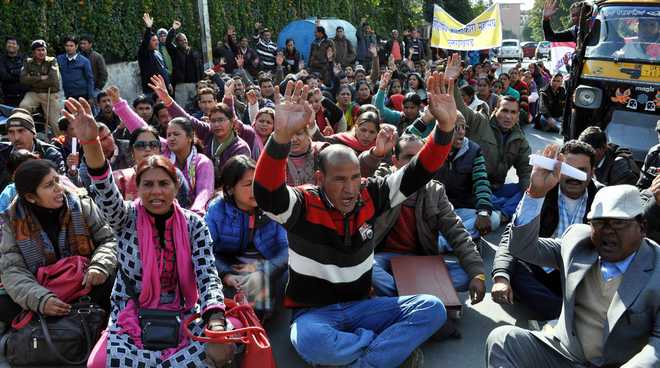 Shiksha mitras held a protest rally here today in support of their demand for increase in salary and allowances. The police arrested about 150 protesters as they were creating a ruckus during the rally.

The protesters under the banner of the Shiksha Mitra Krantikari Mahasangh gathered at the Raipur bus stand and held a rally up to the Chief Minister’s residence. They passed through the Parade Ground and Subhash Road.

The police had placed barricades at the Kanak Chowk and stopped them from moving forward to the Chief Minister’s residence. They raised slogans against the state government.Policemen had heated arguments with protesters who jostled with them to cross the barricades. The protesters sat on a dharna there.

They lamented that they had given several memorandums to government officials and public representatives, but to no avail. They said Chief Minister Harish Rawat had given them a false assurance that their demands would be fulfilled soon, but done nothing.

Shiksha Mitra Krantikari Mahasangh president Poorna Singh Rana said the government should revise the salary of shiksha mitras from Rs 13,000 to Rs 25,000 per month. He demanded accident insurance and job to a family member of deceased siksha mitras on a compassionate ground.

The protesters said the state government should immediately draft a proposal to appoint them in government schools across the state.

The guest teachers under the aegis of the Uttarakhand Guest Teachers Association (Madhyamik) continued with their protest at the Raipur bus stand for the 12th consecutive day. They raised slogans against the state government during the protest.

The protesters lamented that memorandum was given to government officials and public representatives, but to no avail. Vivek Yadav, state president of the association, said members would call off their agitation only after receiving an order from the state government.

He said Chief Minister Harish Rawat had earlier given them an assurance that their demands would be fulfilled soon but done nothing.Later, City Magistrate Lalit Narayan Mishra offered juice to the protesters and assured them of taking steps to fulfil their demands.