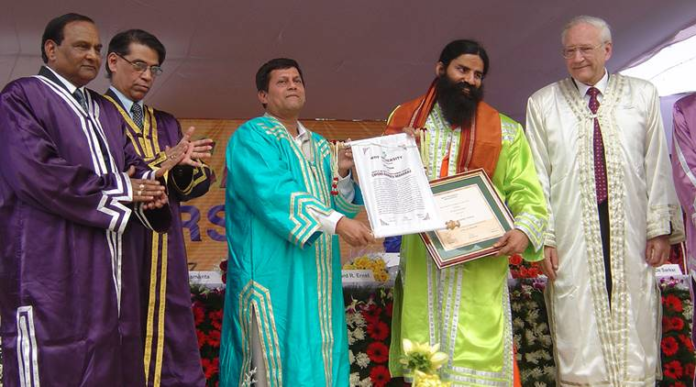 The Ayurveda niche Aggregator Ramdev Baba is keen interested in opening an educational institution by the end of 2017. The following Patanjali Institute might focus on research related subjects, especially for breeding cows, thus possessing a state-of-the-art infrastructure in Haridwar, Uttarakhand.

In a recent event, the Yoga-guru opinionated as it was high time now that “mothers” got all their due in the form of respect as well as attention in all mannerism. The negligence of keeping a cow or even their sheds went on rising thus having a disturbing number of untimely deaths recorded frequently. The rate of deaths is increased from yearly to monthly to, a recent survey, daily basis, in several parts of the country.

According to Ramdev Baba,  Our desi breed of cows will give milk up to 60 liters a day. We plan to end the monopoly of foreign cattle that presently farmers prefer because of their capacity to produce 50-60 litres of milk a day. Our institute will also double up as the biggest cow shelter in India.

Cow being the holy animal in our nation, data revealed that shelters protecting cows were equally engaged in illegal milk production by injecting them now and then. Also, cows were forcibly impregnated so that they could start lactate. India’s one-of-its-kind research institute on cow breeding will help dairy farmers to learn the actual and proper way of breeding through international standards.

Under his flagship of manufacturing Ayurveda products, Ghee is a most demanding product inedible segment after FMCG product consumption. The aggregator plans to open six new production units in domestic as well as overseas market so that demands and needs are met in every plausible way. Apart from introducing new units it also plans to open its Nagpur Food Processing unit in the US.

With spreading its business sections worldwide and increasing the standards on a monthly basis, Ramdev Baba’s plan to open an educational institute in Haridwar by 2017 will certainly give India a reason to boost its milk production for the dairy products manufactured. At present, Patanjali’s source of dairy products is taken from an undisclosed production and manufacturing firm.