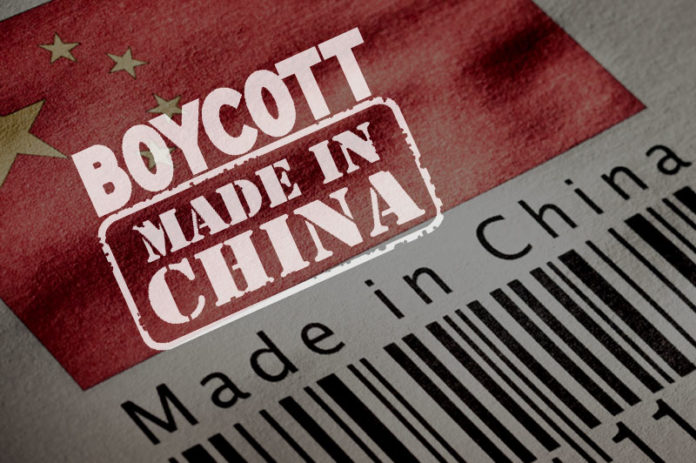 After succeeding the recent surgical strike by the Indian Army in Pakistan area, Today 1000’s of people in Dehradun are showing reluctance in buying China-made products even as messages on social media continued to exhort Indians to boycott these products. On Thursday, a number of college students of the city took out a “Boycott China made goods rally” protesting against the way “China had always cheated India and sided with Pakistan.” “Pakistan has been given a lot of support by China, which is why terrorism still continues to persist. It’s time we give a suitable answer to the Chinese by boycotting their products which will make them realise their folly,” said Rahul Kumar, president of the DAV PG College Students‘ Union, affiliated to the Akhil Bharatiya Vidyarthi Parishad (ABVP), which had organised the rally. Students said that their anger had “boiled over” after news that China had blocked a tributary of the Brahmaputra river in Tibet to facilitate construction of its “most expensive hydro-power project ever.”

“Artificial rice and other agricultural products which are toxic and bad for health are being sent by China to our country, which should be another reason to boycott China made goods,” said Anshul Chawla, former student union president of DAV PG college. Shopkeepers in many parts of the city said that there had been a dip in the sale of Chinese items this festive season.

“People are definitely buying less Chinese products and gift items this season even though they are cheaper. But India also needs to raise production of its goods so that it can compete with the Chinese industry which offers a price advantage,” said Chandra Prakash, a gift shop owner in the Birpur area. Meanwhile, traders of indigenous products including potters who make earthen lamps as well as other decorative items also submitted a memorandum to the city administration on Thursday stating that while Chinese goods are being discouraged, desi products like theirs should be promoted, at least when the demand is high during important festivals.

Other trade bodies, too, voiced similar opinions. “China knows very well that India is one of the largest importers of its goods, raw materials and trade produce. Still, it is constantly supporting a terrorist country which will not be tolerated by us any more. We strongly believe that the government should also impose restrictions on importing Chinese products. A decision on boycotting these products will be taken very soon by the traders of Uttarakhand,” said Anil Goyal, state president, Prantiya Udyog Vyapar Mandal, Uttarakhand.