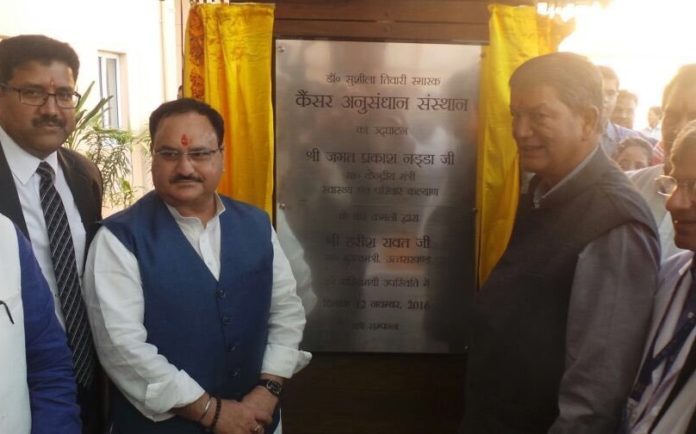 A Cancer research institute was inaugurated at the Himalayan Institute of Medical Sciences at Jolly Grant by Union health minister JP Nadda. The Cancer Research Institute which has in making since 2007 will be a 250 bed hospital and speaking at its inauguration, Nadda said, “This is a great initiative which will really help not only the people of this state but also of neighboring states which till now do not have such a facility. The central govt is also trying to better the health facilities in the country and for that we are planning a cancer research institute in every state. Apart from that, we are also trying to build dialysis centers in every district of all the states which will be free for the people who fall in the BPL category.” The newly opened cancer research institute in Jolly Grant has facilities like bone marrow transplant, radiology, pharmacy, radiotherapy, nuclear medicine, chemotherapy, private and general wards.

To commemorate the 20th death anniversary of spiritual guru Swami Rama, the founder of Swami Rama Himalayan University (SRHU), this institute was inaugurated at the Himalayan Institute of Medical Sciences. Scholarships will also be given to 360 students from 136 schools across Uttarakhand on November 13. CM Harish Rawat who was also present at the occasion said, “We are really blessed that such a kind of centre is existing in the state but we would also like the central govt to help us so that we can build better medical facilities in Jolly Grant, Uttarakhand. The development of this cancer research centre will really be very helpful for the people of not only Dehradun but also for people of other towns and cities in the state especially for those who would earlier have to go places like Mumbai and Delhi.” SRHU also plans on distributing scholarships worth Rs 1.25 amongst 360 students with every student getting approximately Rs 5 lakh for further studies.