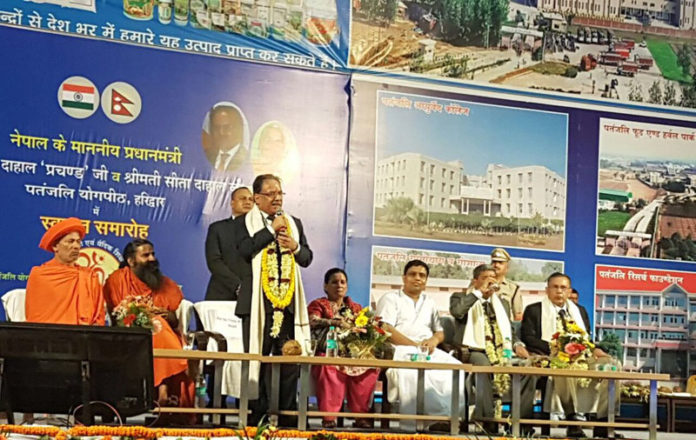 Baba Ramdev met Nepalese Prime Minister Pushpa Kamal Dahal on Sunday after meeting announcement was made by Ramdev that Patanjali Yogpeeth would set up a food and herbal park in Nepal on the lines of one in Haridwar. This will be Patanjali Yogpeeth’s first park in a foreign country.

“In November, Patanjali will set up the first unit of its food and herbal park in Nepal,” a statement by Patanjali Yogpeeth Trust quoted Ramdev as saying. The initial investment in the Nepalese unit would be around Rs 100-200 crore, a source said. 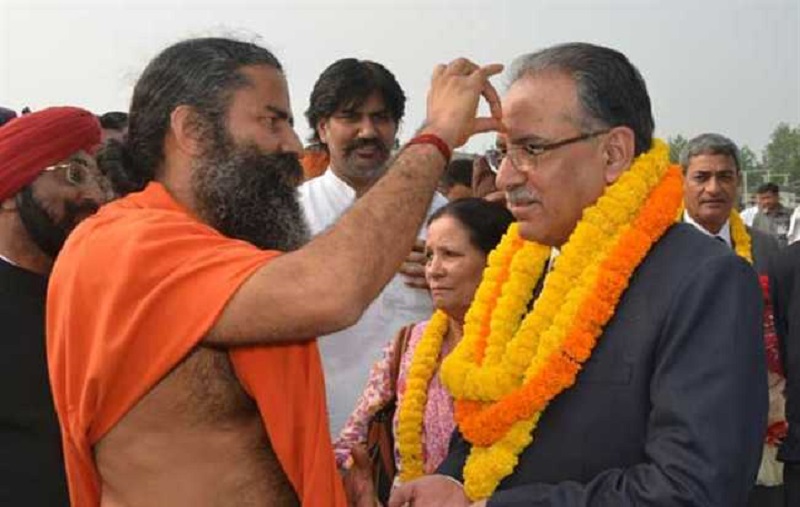 Patanjali Yogpeeth, which is seeking to achieve a target of Rs 50,000 crore in the next three-four years, is expanding its business by setting up four-five new food and herbal parks. The company has recently announced that its food and herbal park at Nagpur in Maharashtra would be ready by the end of the current financial year. The company is also setting up such units in Madhya Pradesh, Uttar Pradesh, Assam and other states.

Nepal prime minister, Pushpa Kamal Dahal, who is on a on a four-day visit to the country on Sunday visited the Patanjali herbal food park in Haridwar. Arriving there amid tight security arrangements he also took a tour of the whole facility.

Stressing that Patanjali can act as a strong link between the two countries, he said the organization can play a role in Nepal’s economic development. He noted that herbs in huge quantities are brought to Patanjali from Nepal and are used for various products. “It will be of immense benefit to us if these are used there as Patanjali is doing here,” he remarked.
Ramdev and Balkrishna will shortly visit Nepal to work out modalities for implementation of these agreements.
Ramdev responded to Dahal’s request by saying that Patanjali will emulate the same model of prosperity for Nepal on the lines of its business in India. “We will set up herbal food park and a university in Nepal. Not a single rupee from the profit generated from this business will be brought to India. Instead it will be invested in Nepal for the benefit of its people,” he said.
Balkrishna said that a blueprint of all projects of Patanjali to be initiated in Nepal will soon be worked out.
Leave something in response: